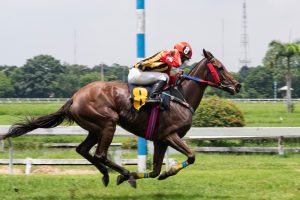 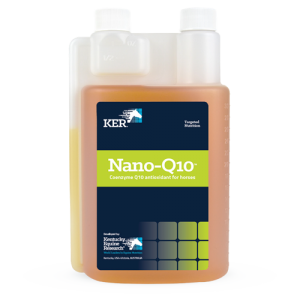 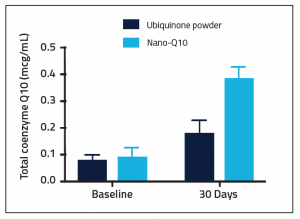 Coenzyme Q10 is involved in numerous reactions in the body, primarily the aerobic production of energy, and is found in highest concentrations in mitochondria, where its function is to carry protons and electrons,
an essential process in the generation of adenosine triphosphate (ATP).

ATP is the main energy currency used by all cells, including muscle cells. Coenzyme Q10 is also found in cell membranes, where it boosts cell integrity.

Coenzyme Q10 is a powerful antioxidant, protecting cells from highly reactive chemicals called free radicals that can damage cells and their DNA. Besides providing direct antioxidant protection, it also improves the antioxidant potential of other antioxidants in the body, like vitamins C and E.

Studies have shown that horses have lower levels of serum coenzyme Q10 than humans and other animals. Moderate to intense training has been linked with reduced levels of coenzyme Q10, which can be prevented with regular oral supplementation. Research has shown that Nano-Q10 upregulates mitochondrial enzymes involved in aerobic energy production.

• Horses in moderate to intense training have a higher demand for coenzyme Q10
• Improves efficiency of energy generation via upregulation of mitochondrial enzymes, leading to delayed onset of fatigue
• Defends against oxidative stress in muscle cells and protects against exercise-induced muscle damage
• Capable of regenerating other antioxidants such as vitamin C and vitamin E
• Research proven to be 3X more bioavailable than powdered form.

Feed 7ml twice per day for the first 7-10 days of supplementation.
Feed 7ml* in feed or orally daily.
Amounts are indicated for horses with a bodyweight of over 400kg. Please adjust according to the weight of your horse. 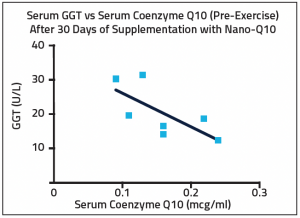